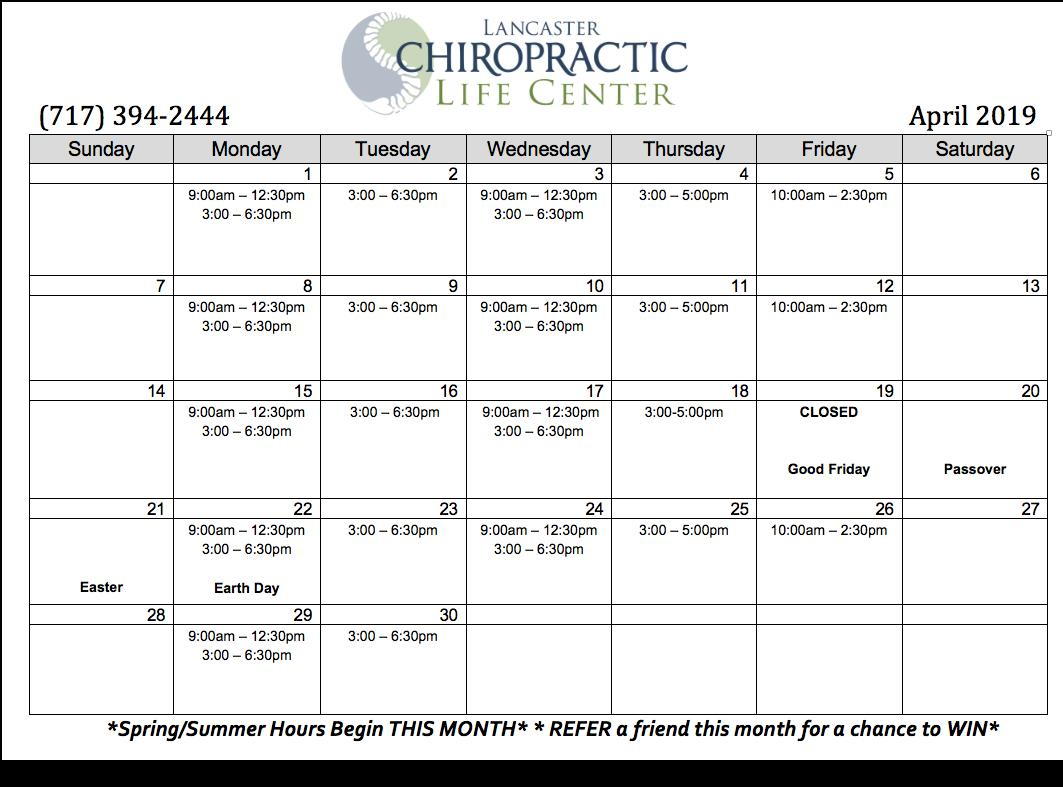 Our Spring/Summer hours will begin this month! We will be OPEN THURSDAYS 3-5PM instead of Saturdays through the summer months. Please note we will be CLOSED Friday, April 19th.

We are trying to use the Remind App, for office closures or other important announcements. We know there will be some days in June that we will need to be closed that will most likely not be scheduled and we think text messages are more readily checked and will be way to keep in touch in these situations. Facebook is always a good way to stay updated as well!

Spring Basket Giveaway!
During the month of April, each time you refer someone to our office, you will be entered for a chance to win a gift basket full of spring goodies. Check out the basket at the front desk for what you could win!

On January 14, 2019, the Journal of Pediatric, Maternal & Family Health published a case study documenting the resolution of chronic bilateral ear infections in a toddler through chiropractic care. The technical name for ear infections is otitis media.

Some of the more common symptoms of otitis media include ear pain, fever, headache, irritability, and listlessness. If left unaddressed, the problem could lead to hearing impairment, a loss of sleep, and a decrease in the overall quality of life not only for the child but also the parents.

Although antibiotic treatment has been a medical main-stay of treatment. Recent concerns for overuse of antibiotics resulting in resistant strain of bacteria have led to more physicians taking a "wait and see" approach to ear infections. All of these factors have driven many parents to seek alternative care approaches for their children, of which chiropractic is the most popular practitioner-based approach.

In this case, a one-year-old girl was brought to the chiropractor by her parents for an evaluation and possible care. The infant's primary problem was she was suffering from reoccurring ear infections. It was reported that over the previous five months, the girl had suffered from 4 bouts of bilateral ear infections. Each time, she had been diagnosed with otitis media and placed on antibiotics. Each time, the ear infection would seem to subside and her symptoms reduce, only to return again a month later after the antibiotic treatment was concluded.

The girl's ear infections were affecting her ability to sleep and causing her to be agitated. In addition to the ear infections, it was noted that the infant girl also suffered from frequent colds, sinus congestion, and food allergies.

A chiropractic examination of the infant led to the conclusion that subluxations were present in the child’s spine, especially in the upper neck area. With agreement from the parents, specific age-appropriate chiropractic adjustments were started to address the infant’s subluxations. The girl received a total of 9 adjustments over the initial 6-week period. After the initial care, the child was seen on a less frequent basis.

After six months of care, a follow-up assessment was performed to monitor the progress. At that time, the parents reported that their baby girl had not had an ear infection or symptoms of an ear infection since she began chiropractic care.

In their discussion and conclusion, the authors of this study stress the importance that chiropractic care could play in this health issue. "Acute OM is such a common condition that it is considered one of the leading causes of visits to medical clinics and for prescription antibiotics. Despite differences in research design and disease definitions, the World Health Organization (WHO) estimated that 28 thousand deaths yearly is attributable to complications (i.e., death through meningitis and brain abscess) of OM." They concluded, "This case report adds to the growing literature on the effectiveness of subluxation-based chiropractic care in children presenting with a history of medically diagnosed OM."

Ever drive lost for miles and miles before stopping for directions? Before the advent of GPS, that was pretty common. When you finally discovered how off course you were, you most likely had to re-trace the roads you were on to get back on track.

Getting lost with your health is similar. If you’ve ‘traveled’ the wrong way for miles and miles with your health – popping pills to mask your pain or searching endlessly for the right pillow – when you finally stop at a Chiropractor’s office to get good directions, you might have to retrace those lost miles with intensive care to get back on track. But the good news is, you won’t be lost any longer.

Once you get pointed in the right direction, Chiropractic care is the GPS that keeps you on course. Get checked regularly, take adjustments when necessary and stay on the right road – we’ll help you reach your destination.