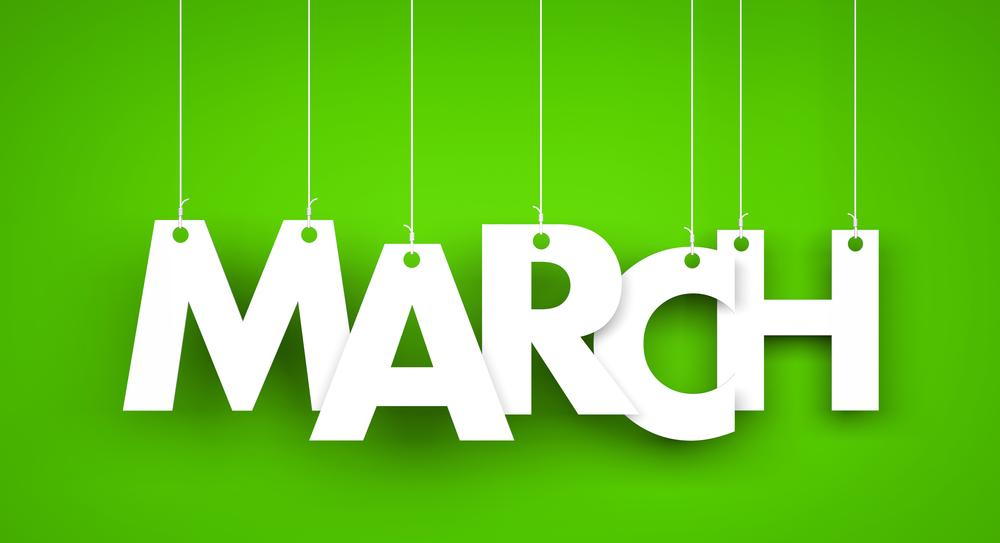 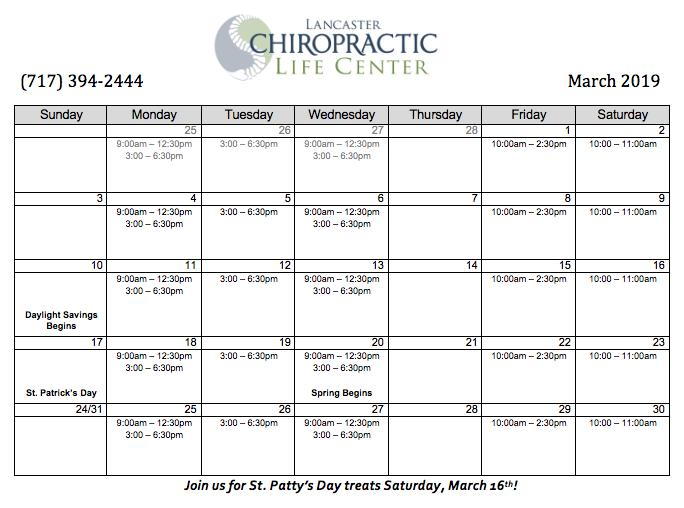 Spring is upon us! March will be our last month on our current winter schedule; please enjoy these last few Saturday’s while we have them available! We will have some treats on Saturday, March 16th in case you come to the office hungry!

I’m sure most of you have noticed a few changes to our walls by now. We hope you like the change as much as we do! Thank you all for bearing with us while the painting and re-decorating were/are taking place.


Resolution of Anxiety, Depression and Decreased Medication with Chiropractic

The Annals of Vertebral Subluxation Research published a case study on November 12, 2018, documenting the care of a woman with a clinical diagnosis of depression and anxiety being helped by chiropractic.

According to the Anxiety and Depression Association of America (ADAA), “Generalized Anxiety Disorder (GAD) is characterized by persistent and excessive worry about a number of different things.” This condition is twice as likely to affect woman than men and is most common in middle age. It is estimated that this condition may affect up to 18% of the population in the U.S. alone, which represents about 40 million people.

There are several symptoms that have been associated with GAD including a feeling of restlessness or on edge, being easily fatigued, having difficulty concentrating, the feeling of your mind going blank, irritability, muscle tension and sleep disturbances.

Panic attacks are many times associated with GAD and are sudden in onset. To be classified as having a panic attack, a person must be having at least four specific symptoms from a list of 13 symptoms associated with the attack. These symptoms include heart palpitations, sweating, trembling or shaking, shortness of breath, feelings of choking, chest discomfort or pain, nausea, dizziness, or feeling faint, hot flashes or chills, numbness or tingling, and a fear of dying.

In this case, a 30-year-old woman went to a chiropractor seeking help for anxiety, panic attacks, and depression. She had been suffering with these conditions for 8 years and was being treated medically with a variety of medications. She reported that she felt she needed to take her medication “too often lately.”

A chiropractic examination was performed which included a postural analysis, thermography, and spinal x-rays. From the examination, it was determined that subluxations were present and specific forms of chiropractic adjustments were started at the rate of four visits per week.

After two weeks of chiropractic care, the woman reported that she had a decrease in frequency of panic attacks, from seven times per week down to less than one per week. She also reported that she was sleeping better and noticed an increase in her energy.

After four months of care, the woman stated she no longer suffered from depression or anxiety. She stated that she had an increased quality of life due to the ability to be happy, as well as her increase in energy. As time and her chiropractic care continued, the patient reported that she was able to get off all her medications for anxiety and depression.

In the conclusion of this study, the authors wrote, “The patient involved in this case study states that she had no anxiety or depression after four months of chiropractic care on subjective patient progression forms. After long term care of two years, the patient ceased all medication for anxiety and depression. The results obtained in this case study shows positive improvement in mental health when chiropractic are was implemented.”

Things You Might Not Know About St. Patrick’s Day

We Should Really Wear Blue – St. Patrick himself would have to deal with pinching on his feast day. His color was “St. Patrick’s blue,” a light shade. The color green only became associated with the big day after it was linked to the Irish independence movement in the late 18th century.

There’s A Reason For The Shamrocks – How did the shamrock become associated with St. Patrick? According to Irish legend, the saint used the three-leafed plant as a metaphor for the Holy Trinity when he was first introducing Christianity to Ireland.

It Could Have Been Saint Maewyn’s Day – According to Irish legend, Saint Patrick wasn’t originally called Patrick. His birth name was Maewyn Succat, but he changed his name to Patricius after becoming a priest.